Before there was John Williams or Ennio Morricone or Danny Elfman, or for that matter, any of the other film composers working today, the movie studios had at their disposal an incredible pool of talent whose classic works remain a cut above the rest: Erich Korngold, Franz Waxman, Max Steiner, Miklos Rozsa, Dimitri Tiomkin—all European emigrés—along with the home-grown Bernard Herrmann, David Raksin and Alfred Newman (the leader of a musical dynasty whose brothers [Emil and Lionel], sons [David and Thomas] and nephew [Randy, of course] all composed for the movies).

Like the films they scored, the work these composers produced was considered somewhat ephemeral, merely an accompaniment to the stars whose faces adorned the screen. This seemed to be the general view until the early 1970’s when Charles Gerhardt, a music producer for RCA with a modest conducting background, began to record an extraordinary series of albums devoted to the compositions of these men and the actors whose films they wrote for. Initially released on LP, the albums reappeared on CD in the 1980’s, and last year were remastered and re-released. I’ve been listening to the most recent version, and I can’t believe the depth of sound. Quite an eye (ear?)-opener—I honestly don’t remember the music being this full or detailed even on vinyl.

Gerhardt’s reassembly of these scores involved some painstaking detective work, which is detailed in the program notes for the “Spectacular World of Classic Film Scores” album. Speaking of which, that album contains two important selections written by the composer whose work surprised me the most in this series—Dimitri Tiomkin, whose music until this point I had never really cared for. Despite his Russian origins, he wrote for a lot of Westerns, most prominently “High Noon” (“Do not forsake me/Oh my darlin’/On this our wedding day”), “The Alamo” and TV’s “Rawhide.” But Gerhardt’s Tiomkin album contains an extended suite from “Lost Horizon” which is pure genius, with the composer depicting Shangri-La and its people seemingly without meter, a sly pun, perhaps, on their eternal life. There’s also the love scene in the barn from “Friendly Persuasion,” which sounds almost Copland-esque, ultimately blooming into the familiar theme. Best of all, on “The Spectacular World of Classic Film Scores” you can hear a suite from “The Thing (From Another World),” one of the most unusual soundtracks ever written. In the interest of full disclosure, however, I must (sadly) tell you that Gerhardt opted to use an ondes Martenot and four countertenors in place of a theremin. The former instrument produces a rounder, more mellow sound than the wiry, put-your-teeth-on-edge theremin, but Tiomkin’s weird intervals, buzzing trumpets and trilling piccolos still bring “The Thing” to life in all its glory. 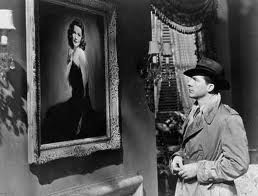 still hasn’t made it to DVD). Has there ever been a lovelier movie theme, before or since, than “Laura”? Gerhardt’s selection begins with the underscoring of the classic scene in which Detective McPherson, obsessed with Laura and her murder, falls asleep in her apartment, only to awaken to find her alive and standing over him. The suite from “The Bad and the Beautiful” makes you very aware that Raksin’s score is a virtual mini-symphony, with extensive and formal theme development.The same can be said for Miklos Rosza’s music for “The Red House,” though I enjoyed Gerhardt’s selections from “The Lost Weekend” and “Spellbound” far more—particularly the latter, which includes the music from the dream sequence that Gregory Peck’s character relates to Ingrid Bergman’s mentor. And while we’re on the subject of theremins, Rosza uses this instrument extensively in the scores of both films to depict Ray Milland’s DTs (the “bat and mouse” sequence has got to be one of the most revolting things ever put on film) and Gregory Peck’s zone-outs when he sees wavy lines. Gerhardt also includes some of Rosza’s outstanding work for the Kordas in England, the best of which is the sequence from “The Four Feathers” when Ralph Richardson loses his pith helmet and gets sunstroke.

Even though I’ll be discussing a number of other albums in the Gerhardt series in the weeks to come, I’m going to reveal my favorite now: the CD devoted to Franz Waxman’s music. The selections couldn’t be any better, featuring his back-to-back Oscar-winning scores for “Sunset Boulevard” and “A Place in the Sun,” the sparkling theme from “The Philadelphia Story” and the mysterious “Rebecca.” Talk about an embarrassment of riches. The overall impression, though, is one of the composer’s thoughtfulness in what he’s writing about—that brooding alto saxophone and later the lush strings that mark the love theme of “A Place in the Sun,” the ghostly Paramount theme during the scene on the back lot and the pseudo-Oriental accompaniment to Norma Desmond’s madness at the end of “Sunset Boulevard.” But best of all is the music that brings “The Bride of Frankenstein” to life, complete with that riot of a solo for ondes Martentot:

Next week: Korngold, Herrmann and Steiner!