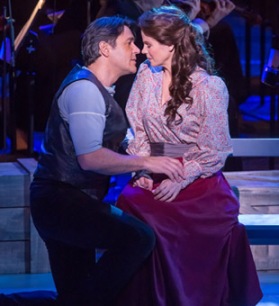 I think Rodgers and Hammerstein’s “Carousel” has always required an extra leap of faith on the part of its audience. Half melodrama, half homespun philosophy with more than a dash of fantasy, it’s become somewhat difficult to take given today’s attitudes toward bullies and men who hit their wives. But because of its musical score it has something of a mythical status in the Rodgers and Hammerstein canon. At its best, during the Bench Scene which includes “If I Loved You,” we’re watching an extraordinary milestone in musical theater.

The New York Philharmonic recently gave “Carousel” the all-star treatment, and the results were aired on PBS this past Friday (the performance will be accessible on the station’s website until May 3). I lasted until Kelli O’Hara, as the luckless Julie Jordan, began “What’s the Use of Wond’rin’,” at which point I had to bail. My credulity had reached the breaking point, with both the story and the production, and my remote became a lifesaver.

I’m not sold on staged or semi-staged versions of musicals presented with a full symphony orchestra. I think it’s an awkward format at best; at worst, it can be a bloated mess. Broadway musicals were written with pit bands in mind; given the theaters’ cramped quarters, 24 players, give or take, was a big orchestra back in the day. So I wasn’t surprised that the New York Philharmonic sounded sluggish and ungainly reading the Rodgers and Hammerstein score. Matters weren’t helped by the slow tempos of conductor Rob Fisher—I half expected Kelli O’Hara and Nathan Gunn to turn blue during “If I Loved You.”

Casting was also a problem. I love Kelli O’Hara and thought she was a terrific Nellie Forbush, but something was off in her performance as Julie Jordan. At this point in her career, she’s past playing a role like that. I’m not fond of the character (frankly I think she’s a doormat), but in all honesty, it would take a young actress projecting total innocence and naiveté to get me to believe in her. And I don’t think Ms. O’Hara was helped by Nathan Gunn’s Billy Bigelow. Gunn is an operatic baritone, one of the first singers to catch the “barihunk” label. On the opera stage he’s decent, but he’s not capable of delivering “Soliloquy” the way it should be done—in character as Billy Bigelow. What we got instead was Nathan Gunn singing the showstopper.

This raises an issue of constant debate—do you prefer a performer with less voice but better acting chops in a musical? Sometimes I do. Obviously it depends on one’s own taste, but I dare anyone to listen to the “Cabaret” recording featuring Natasha Richardson and tell me that isn’t Sally Bowles to the life (my jaw hit the floor when  I first heard it). Her voice is at best passable—she can carry a tune— but she reads the lyrics in character. Of course Sally isn’t Billy Bigelow (the film version of “Cabaret” always begs the question that if Sally sounds like Liza Minnelli, why is she working in a dive like the Kit Kat Klub?), but try listening to the recording of the 1994 revival of “Carousel.” This featured a young Michael Hayden as Billy (not to mention Audra McDonald as Carrie), and while he was no John Raitt or Nathan Gunn, he brought so much to the table: Billy’s wonderment at being a father, his pride in Bill, his total anguish at not being able to provide for a daughter. He acts the role and the singing follows, rather than the reverse, and the result is an eye opener.

Even with these misgivings, “Carousel” is worth watching. Jessie Mueller is an excellent Carrie Pipperidge, and Jason Danieley (Mr. Snow), Shuler Hensley (Jigger) and Stephanie Blythe (Nettie Fowler) all do a great job. And even if you’re like me, who’d rather spend time with Curley and Laurie in “Oklahoma!” or Emile and Nellie in “South Pacific,” hearing the music of “Carousel” remains something special.

One thought on “Carousel”