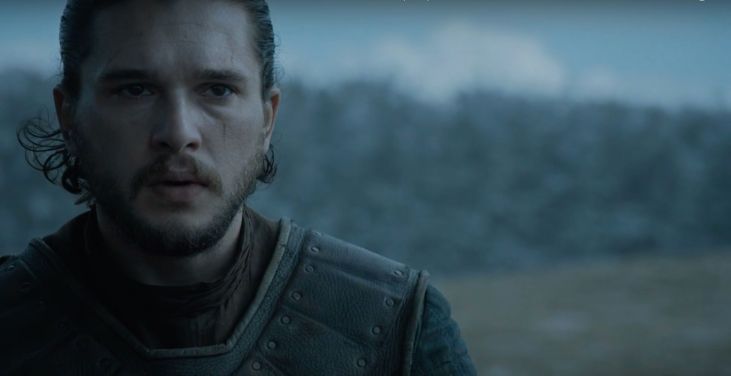 If ever a television episode spoke for itself, “Battle of the Bastards,” last night’s “Game of Thrones” offering, certainly did. There’s very little I can add except to ask, “How many Emmys do you think it’ll win?”

I think the image of Rickon and Jon futilely racing toward each other across the battlefield will stay with me for a very long time. We instinctively knew Sansa’s prior assessment that Rickon was a dead man would hold true, yet the beauty of desperation and longing made us believe for just an instant until the arrow struck.  And Jon’s unsheathing his sword to face what seemed certain death was the gallant gesture of a king. He’s pure Stark, through and through.

[Before we leave the battlefield, though, I have to say that if you didn’t expect Littlefinger and the Knights of the Vale to save the day, you haven’t been paying attention this season. In addition to her letter writing skills, our girl Sansa sure knows her way around ravens.]

I’m curious as to how successful this new Targaryan/Iron Islands alliance is going to be. Despite all the flirting, political and otherwise, between the two ladies, I can’t believe the followers of the Drowned God will so readily give up their nasty ways. They’re been pillagers and pirates for centuries. They’re not like the Dothraki who worship Daenerys as the Mother of Dragons, so I imagine our Ms. Stormborn and trusted advisor Tyrion are going to have their hands full before long.

Finally, at long last, Ramsay Bolton got his by becoming doggie dinner. It was tremendously thoughtful and brotherly of Jon to stop whaling on him so that Sansa could deliver the coup de grâce. But was it really enough as far as the Boltons are concerned? Instead of Ramsay dispatching his old man, I would have liked Arya to have stuck Roose Bolton with Needle and rummaged around his insides for a bit. I’m certain I’m not alone in thinking that Lady Sansa’s goodbye smirk to her erstwhile hubby, while satisfying, wasn’t truly commensurate with the torture Ramsay put her and Theon (not to mention the audience) through. At least his three seasons of sadism are over, though the GoT showrunners keep upping the ante in that department (See “Shireen, Death of”).

Nevertheless, we may finally have Red Wedding vengeance if the season’s finale promo is any hint. It looks like banquet time chez Frey, and here’s hoping they end up skewered. Also on tap are Cersei and Loras’ Trials by Sparrow—will House Tyrell rescue them? And what of Bran and Uncle Benjen? How’s Varys doing? The Hound? Did Brienne return to Tarth? Will Arya make it back to Winterfell for a Stark reunion?

Be there on Sunday to (hopefully) find out.

One thought on “Reckoning”