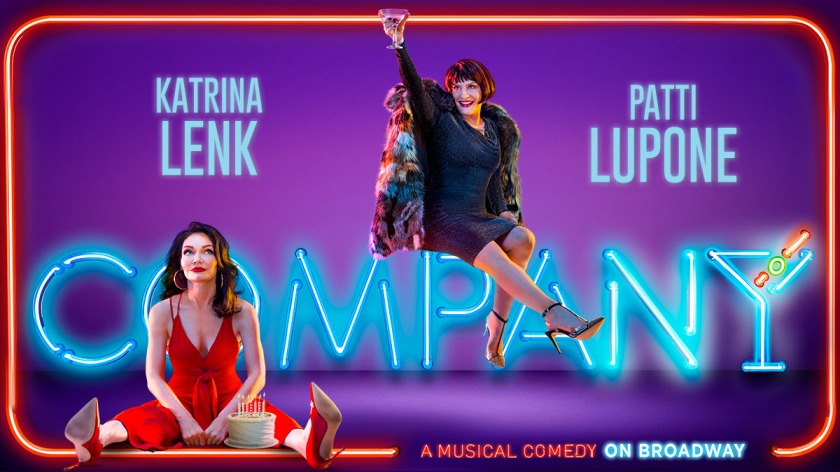 The new production of “Company,” now in previews on Broadway, asks a fundamental question: Can Bobby legitimately become Bobbie? (She can, since the role is now played by Katrina Lenk). Can the show work with a female protagonist? After seeing a performance last night, I have to say “Sometimes.” Like its leading character, Director Marianne Elliott’s production doesn’t necessarily have the bad things, but it doesn’t consistently have the good things either.

At first blush, seeing a female Bobbie isn’t that much of a stretch. However, the main problem with this version is that the premise of the show, which premiered in 1970, is passé. I mean, does anyone really care anymore if someone is married or not, except perhaps for your mother? Fifty years ago marriage was viewed as an essential step in life. Not so now, and not for several decades. And despite some astute updating—Paul and Amy are now Paul and Jamie, a gay couple—other scenes, retained from the original, are quite dated, especially the pot-smoking vignette. Hello: It’s now legal in how many states? Seeing upper middle class folks get stoned doesn’t quite have the daring effect it had 50 years ago.

Equally troublesome is the sense that the dynamic of the relationship between Bobbie and her married friends, with the possible exception of Paul and Jamie, is wrong. Bobbie seems to rely more on the male half of the couples, but a single woman, particularly someone in her 30’s, would be more apt to have initially made friends with and be closer to the women (I speak from my long experience as a single woman). In fact the “Company” women, with the exception of Joanne, seem somewhat marginalized here. It felt somewhat jarring to hear Bobbie ask Harry “Are you ever sorry you got married?” That was a natural question for a male Bobby to ask his buddy, but it’s odd hearing it from a female protagonist, notwithstanding the fact that Christopher Sieber who plays Harry, is a big huggable teddy bear. You’d think she’d ask Sarah, his wife. But the central problem with Bobbie, as it is with Bobby, is that the character is an observer. Katrina Lenk projects intelligence and humor, which help, but the character remains something of a cipher.

There’s no doubt this production works best when the focus is on Stephen Sondheim’s terrific score which has been newly re-orchestrated. It’s a bit more mellow now, and occasionally jazz-inflected—less piercing perhaps than the original. It’s played by a multi-piece orchestra (strings included) that sits above the stage and is revealed toward the end of the opening number. There are some wonderful musical surprises along the way: “You Can Drive a Person Crazy,” now sung by Bobbie’s three boyfriends who have been re-harmonized not to sound like the Andrews Sisters anymore, but like The Four Freshmen, minus one. And Bobby Conte Thornton, who plays P.J., gives fine voice to “Another Hundred People.” This is all topped off by some exceptionally clever staging, especially for “Side by Side by Side” and “Getting Married Today,” complete with levitating wedding cake, which has to be seen to be believed (and got the biggest laughs in the show).

As expected, “The Ladies Who Lunch” remains the most striking moment in “Company,” especially now when it’s sung by a woman to a woman. Joanne’s outburst finally made dramatic sense to me—she’s speaking not only of her herself but of what Bobbie may become. It’s wonderfully performed by Patti LuPone who sings it cleanly without a hint of camp or eccentricity. What laughs she gets are not the result of shtik, but are native to the lyrics. It’s an excellent performance (By the way, it’s Ms. LuPone who delivers the pre-show directive to the audience to shut down all cellphones. You never saw a mass of people snap to so quickly in your life).

On balance this production of “Company” remains worth seeing. It opens on March 22, Stephen Sondheim’s 90th birthday. Enjoy.